I’ve been writing recently on unity within the Conservative ranks (an example) and I’ve spent the last few days reflecting on this topic. Much of that time has been spent just observing conversations among conservatives on Twitter. One thing that becomes painfully obvious is that self-proclaimed conservatives tend to have a hard time agreeing on much outside of a few core principles such as lower taxes, less government, more freedom, and various similar conceptual constructs. Aside from that, there tends to be a struggle for agreement on more specific issues (the so-called aptly named wedge issues), and even what comprises the aforementioned constructs, and how to achieve them.

Therefore, I decided to take a look at why it is so hard for conservatives to build and hold coalitions, not to mention why it is so hard to reach any kind of agreement/consensus within the conservative grass roots. Now it’s no secret that there are many groups under the conservative umbrella, including (but not limited to) social conservatives, fiscal conservatives, and libertarian-leaning conservatives. It’s no surprise, then that it might be difficult to obtain unity within such a diverse collection of interests. That’s not to say that it can’t be done; on the other side of  the aisle, leftists are comprised of similarly diverse groups (e.g. greenies, union members, and self-avowed socialists and communists). However, they seem to have less trouble building and maintaining coalitions. Further, in the not too distant past, Ronald Reagan was able to build a powerful conservative coalition with his “Three Legged Stool” coalition in the GOP of fiscal, social, and national security/defense “neocon” conservatives. His policies reflected this coalition by stressing free enterprise, a strong national defense and pro-family social policies.

Reagan was known as “The Great Communicator”, therefore it’s not very surprising that he was able to create and maintain this coalition, ultimately leading to 12 years of prosperity for the United States. Unfortunately, there has been an absence of such a charismatic leader for the conservative cause since, and it would be beneficial to take a look at some of the barriers preventing a durable and long-lasting conservative coalition in the mold of Reagan’s “Three Legged Stool.” Specifically, what is it that leads to the vicious infighting, purity tests and “eating of our own” within conservative circles that leads us to outcomes such as sitting at home during an election, ensuring four more years of Barack Obama.

One possible root (one that I think is very explanatory) comes from the field of Cognitive Psychology. To be clear, I’m not basing this post on specific research on this topic, but rather general concepts from the field (albeit learned in grad school almost 20 years ago). I’m also not referring to anyone specifically, but outlining general characteristics that can be found in conservatives (as opposed to leftists).

What I find to be most instructive is a concept known as the Ingroup Bias. In a nutshell, this is just another way of saying that individuals tend to seek out people with similar views and outlooks to form their group. Naturally, these people will tend to view members of their own group as preferable and superior, while viewing people outside of the group as outsiders and inferiors. In general, this is what leads to both groupthink on one hand and prejudice on the other. The question is, how does this relate to conservative coalitions? 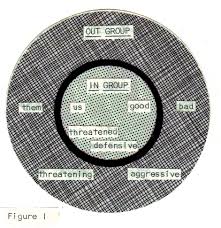 identify as democrat, liberal or progressive) as part of their political ingroup. As an aside, the graphic on the left also shows that the outgroup is seen as threatening an aggressive, which can also explain the rhetoric against conservatives used by leftists (particularly the comments made, and terms used by Obama).

Conservatives, on the other hand, tend to have a more individualistic world view, meaning that they tend to look at peoples more as individuals, and less as a part of a group. This approach is superior (in my opinion) when dealing with people on a one-on-one basis, but makes coalition building more difficult. Specifically, when defining ingroups, conservatives are more likely to place importance on another’s views before considering that person as part of the ingroup (as opposed to the demographic characteristics seemingly used by leftists). This process manifests itself in a decreased likelihood of a social conservative to view a fiscal conservative as part of his or her ingroup solely on the basis of both calling themselves “conservative.” This is also why we tend to see purity tests among conservatives; one must pass the test before being considered part of the ingroup. This leads to much smaller, ideologically pure ingroups. As opposed to leftists with large ingroups, these smaller conservative ingroups mean that not only will conservatives see leftists as part of a threatening outgroup, but other groups of conservatives are considered outgroups as well. The net effect of all of this is the constant infighting we see between (for example) social and fiscal conservatives, or even the no abortion under any circumstance proponents and those who believe that there should be an exception for cases of rape or incest. These are the challenges that conservatives face in building coalitions to win elections on a national level*.

Once again, Reagan was able to effectively hold his three legged coalition together despite these challenges because he was a strong charismatic leader, and could effectively communicate the conservative world view in a manner that a large majority of Americans could understand and sympathize with. In the absence of such a leader in the current GOP, or broader conservative circles, the grassroots are going to have to understand these processes in order to effectively overcome them in order to serve the broader national interest. There’s no denying that anyone considering themselves a conservative wanted another four years of Obama as much as they wanted a raging case of herpes; unfortunately our inability to maintain a coalition led to that exact unfortunate result.

In the absence of another Reaganesque charismatic leader emerging, I will continue to beat the drum for conservatives to live by the Reagan 80% Rule:

My 80 percent friend is not my 20 percent enemy

Maybe by keeping that simple rule in mind at all times, we can put our differences aside and begin to see the big picture and work together to start unraveling the leftist quagmire that Obama, Reed and Pelosi have drug us into over the past 5+ years – starting in 2016.

*I’m focusing more on the challenges facing national conservative coalitions. When we start looking at the state and local levels, the more local we get, the more similar people will tend to be in their experiences and outlooks. As a result, coalitions are easier to form and maintain here than on a national basis.

4 thoughts on “On Conservative Coalitions”